To continue doing our part to protect each other from COVID-19, we ask that you please wear a cloth or non-woven face mask and maintain 6 feet or more of physical distancing while attending in-person Bible studies. 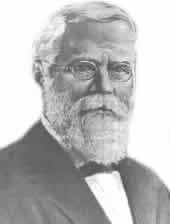 Dr. J. M. Carroll, the author of this book, was born in the state of Arkansas, January 8, 1858, and died in Texas, January 10, 1931. His father, a Baptist preacher, moved to Texas when Brother Carroll was six years old. There he was converted, baptized, and ordained to the Gospel ministry. Dr. Carroll not only became a leader among Texas Baptist, but an outstanding figure of Southern Baptists, and of the world. Years ago he came to our church and brought the messages found in this book. It was then I became greatly interested in Brother Carroll's studies. I, too, had made a special research in Church History, as to which is the oldest Church and most like the churches of the New Testament.

Dr. J. W. Porter attended the lectures. He was so impressed he told Brother Carroll if he would write the messages he would publish them in a book. Dr. Carroll wrote the lectures and gave Dr. Porter the right to publish them along with the chart which illustrates the history so vividly.

However, Dr. Carroll died before the book came off the press, but Dr. Porter placed them before the public and the whole edition was soon sold. Now, by the grace of God, we are able to present this 66th edition of 20,000. I want to ask all who read and study these pages to join me in prayer and work that an ever-increasing number shall go forth.

"To make all men see what is the fellowship of the mystery which from the beginning of the world hath been hid in God, who created all things by Christ Jesus; to the intent that now unto the principalities and powers in Heavenly places might be known by the Church, the manifold wisdom of God ... unto Him be glory in the Church by Christ Jesus throughout all ages, world without end, Amen" (Ephesians 3:9-10, 21).

It was wonderful to hear Dr. Carroll tell how he became interested in the history of the different denominations -- ESPECIALLY THEIR ORIGIN. He wrote the book after he was 70 years old, but he said, "I was converted unto God when I was just a boy. I saw the many denominations and wondered which was the church the Lord Jesus founded."

Even in his youth he felt that in the study of the Scriptures and history, he could find the church which was the oldest and most like the churches described in the New Testament.

This research for the truth led him into many places and enabled him to gather one of the greatest libraries on church history. This library was given at his death to the Southwestern Baptist Seminary, Ft. Worth, Texas.

He found much church history--most of it seemed to be about the Catholics and Protestants. The history of Baptists, he discovered, was written in blood. They were the hated people of the Dark Ages. Their preachers and people were put into prison and untold numbers were put to death. The world has never seen anything to compare with the suffering, the persecutions, heaped upon Baptists by the Catholic Hierarchy during the Dark Ages. The Pope was the world's dictator. This is why the Ana-Baptists, before the Reformation, called the Pope The Anti-Christ.

Their history is written in the legal documents and papers of those ages. It is through these records that the "TRAIL OF BLOOD" winds its way as you find such statements--

"At Zurich, after many disputations between Zuinglius and the Ana-Baptists, the Senate made an Act, that if any presume to re-baptize those who were baptized before (i.e. as infants) they should be drowned. At Vienna many Ana-Baptists were tied together in chains that one drew the other after him into the river, wherein they were all suffocated (drowned)." (Vida Supra, p. 61)

"In 1160 a company of Paulicians (Baptists) entered Oxford. Henry II ordered them to be branded on the forehead with hot irons, publicly whipped them through the streets of the city, to have their garments cut short at the girdles, and be turned into the open country. The villages were not to afford them any shelter or food and they perished a lingering death from cold and hunger." (Moore, Earlier and Later Nonconformity in Oxford, p. 12.)

"The 25th of May--in St. Paul's Church, London--examined 19 men and 6 women. Fourteen of them were condemned; a man and a woman were burned at Smithfield, the other twelve of them were sent to towns there to be burned."

Froude, the English historian, says of these Ana-Baptist martyrs--

"The details are all gone, their names are gone. Scarcely the facts seem worth mentioning. For them no Europe was agitated, no court was ordered in mourning, no papal hearts trembled with indignation. At their death the world looked on complacent, indifferent or exulting. Yet here, out of 25 poor men and women were found 14, who by no terror of stake or torture could be tempted to say they believed what they did not believe. History has for them no word of praise, yet they, too, were not giving their blood in vain. Their lives might have been as useless as the lives of most of us. In their death they assisted to pay the purchase of English freedom."

Likewise, in writings of their enemies as well as friends, Dr. Carroll found, their history and that their trail through the ages was indeed bloody:

Cardinal Hosius (Catholic, 1524), President of the Council of Trent:

"Were it not that the baptists have been grievously tormented and cut off with the knife during the past twelve hundred years, they would swarm in greater number than all the Reformers." (Hosius, Letters, Apud Opera, pp. 112, 113.)

The "twelve hundred years" were the years preceding the Reformation in which Rome persecuted Baptists with the most cruel persecution thinkable.

"The Baptists are the only body of known Christians that have never symbolized with Rome."

"Before the rise of Luther and Calvin, there lay secreted in almost all the countries of Europe persons who adhered tenaciously to the principles of modern Dutch Baptists."

"It must have already occurred to our readers that the Baptists are the same sect of Christians that were formerly described as Ana-Baptists. Indeed this seems to have been their leading principle from the time of Tertullian to the present time."

Tertullian was born just fifty years after the death of the Apostle John.

Baptists do not believe in Apostolic Succession. The Apostolic office ceased with the death of the Apostles. It is to His churches that He promised a continual existence from the time He organized the first one during His earthly ministry until He comes again. He promised:-

"I will build my church and the gates of hell shall not prevail against it." (Matt. 16:18)

Then, when He gave the great Commission, which tells what His churches are to do, He promised:-

This Commission -- this work -- was not given to the Apostles as individuals, but to them and the others present in their church capacity. The Apostles and the others who heard Him give this Commission were soon dead -- BUT, His Church has lived on through the ages, making disciples (getting folks saved), baptizing them, and teaching the truth -- the doctrines -- He committed to the Jerusalem Church. These faithful churches have been blessed with His presence as they have traveled the TRAIL OF BLOOD.

This history shows how the Lord's promise to His churches has been fulfilled. Dr. Carroll shows that churches have been found in every age which have taught the doctrines He committed unto them. Dr. Carroll calls these doctrines the "marks" of New Testament Churches.

"Marks of the New Testament Church"

This, Dr. Carroll has done, to the churches of all ages. He found many had departed from "these marks, or doctrines." Other churches, however, he found had been true to these marks in every day and age since Jesus said,

"I will build my church and the gates of hell shall not prevail against it."
(Matt. 16:18)

Please consider studying the articles published each week in our church bulletin.

Do you have a topic you are interested in learning more about. Consider the Topical Index to get you started.

The “Mutual Faith” that Comforts

The Kingdom of Heaven with an Earthly Mission

Written by Brother Jim Brasseal and answers the question “Can we love the sinner and hate the sin?”

The Coming of John the Baptist

The Trail of Blood

A small booklet written By Dr. J. M. Carroll (1858-1931) that details the history of the Lord’s churches through the ages and identifies the marks of a true New Testament Bible teaching church.

Written by Brother Jeffery Barron and examines the false teaching of Calvinism based on the scriptures.

The Influence of Baptists

Feel free to email your questions about God, the Bible, or anything else, and we will gladly reply. If you live in the Denver-metro area, please visit our services.